Nightmare on Yarn St-Part I

Well it has been a while since I wrote in the blog.  I have been so busy but not too busy to knit. I've tried the new specialty yarn for making frilly scarves.  I've tried 4 of the 8 types I've bought.  At first I thought I had made a huge mistake buying all this specialty yarn.  I just couldn't knit it!!!  It was a yarn nightmare!  But needless to say I figured them out...for the most part.  I just had to turn into Freddie Kruger of the Knitting World, Grrrrr.

Two have become pretty nice scarves. One is still in process but coming along nicely. The fourth was nearly impossible to work with but I'm sure I'll get it figured out (Grrr, again). 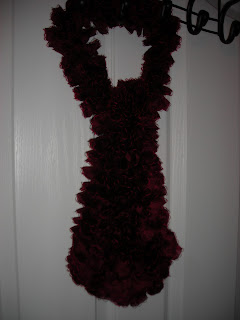 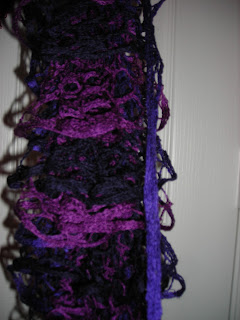 I also tried a shawl that's not quite complete but made on size 35mm needles.  Its pretty and I think I'll like it once the crochet edging is done on it. Somehow, I've managed to lose the tag that came with it.  It is just a collage of about (if I counted right) 12 different mostly non-yarns, if that makes sense.  Its ribbon, string (albeit fancy string), Boucle yarn, sequin stranded together on thread, etc. 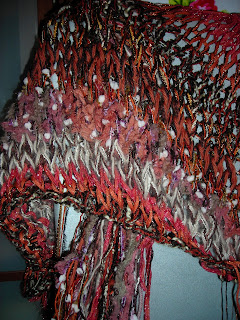 I've also got babies to think about.  One baby will be "one" at the end of the month.  So she needs something special.  I bought some really nice red yarn for a sweater or dress but I haven't much time to get to it. 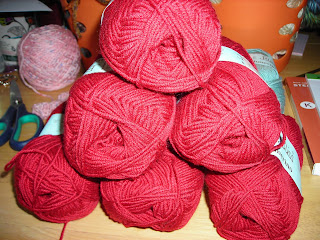 Then a lovely girl at my church is expecting but I don't expect very soon, I have a few months before the baby showers begin. there will also be a sweater to go with the hat. :) 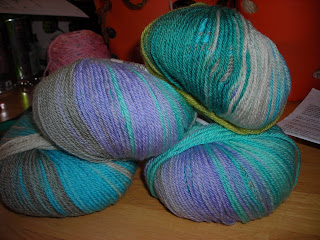 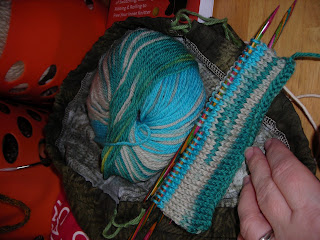 I still have three scarves I've cast on in the process of teaching people to knit and I always joke with them that they are challenged to finish theirs before I finish mine.  So far they've all beaten me, HA!  Not much of a challenge, am I? I also haven't worked on these much.  I work on them when I want to watch TV which is usually only during NASCAR! 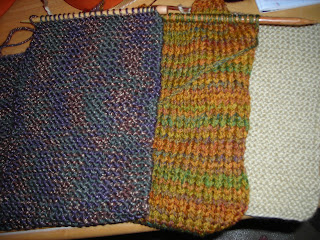 My sweet husband bought me some sock yarn one day and I cast that on right away so he knows how much I appreciate the gift.  I thought I'd try out The Yarn Harlot's "A Good Plain Sock."I've actually been working on these most of the week.  Still, I haven't made it to the heels yet. 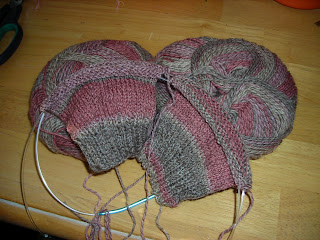 So here's me with toooooo many irons in the fire as per usual.  But enjoying myself so much, also as per usual! I've knitted some other stuff too but I think I'll save those for a "cameo" appearance at the homeless shelter!
Posted by ContraryWise at 9:34 AM No comments: