So in one of my shopping trips to the local yarn store (only 1 of 3 times I've been there), I bought something call Queensland Collection Mist, made in Italy, 60% wool and 40% acrylic.  It is thick and thin which I didn't realize at the time. I have no clue what to do with it.  I'd like to make a knitted shawl but what pattern would work for it?  I have 4-50g balls (50m) of it and I'd love to do something with it....


Added Note:  Queensland makes me think of Australia where lots of nice wool can be obtained...why then is this stuff made in Italy?  Just curious...
Posted by ContraryWise at 11:10 AM No comments:

I made some hot pads for a cooking party I had this past Tuesday.  I got the idea from one of my Ravelry friends.  Her's looked so good.  I am not so sure about mine.  I like them but they are not as pretty as her's. She got the idea from a coaster pattern and then made it larger for hot pads.

Here is the pattern:


I made backing for them before I made the tops:


I started with an open loop and then pulled the end to tighten once I had all the single crochets.  This is actually something I learned recently.  In the past I would have made a chain 3 or whatever, joined with a slip stitch and then started the round.  This method (the sliding loop) is neater and tighter.  I found this in the book Beyond the Square, Crochet Motifs by Edie Eckman.

So we have a cat now.  Our daughter really worked her father over on this.  I said, "No!"  My Husband said, "No!" then he said, "yes..."  But being the softies we are, we already love the cat.  She's white with blue eyes and completely deaf, a trait that is 60% in white cats with blue eyes.  She's been into everything.  She's been in my basket of gauges and failed attempts.  She now has the double knitted sample and some strings of yarn tied into a "fly" and a pom-pom we are calling her mouse. I named her Sassy. We gave her a collar with a bell since she can't hear us, we need to be able to hear her.  No, we won't de-claw her.


It is funny that when she starts biting on anyone in the house, they grab the yarn sample and say, "here, play with your knitting." So, like me, she loves yarn. She really is a blessing.
Posted by ContraryWise at 8:13 AM No comments:

From last week I had started the stranded cap from Mastering Color Knitting. I think the first thing to master is reading the instructions.  I am incapable of really reading instructions like a normal person.  I read the pictures, I skim the basics and get started.  So I read through the instructions (again, I use the word "read" loosely). And started up the hat.  It went great, I kind of got into a rhythm and it all came off fine...until I put the thing on.  Its Gi-normous. wow, it comes down to my nose.  So I pick up the instructions and "read" some more.  I realize I've used the wrong needles.  Arrrrggghhhhh.

It did turn out pretty though: 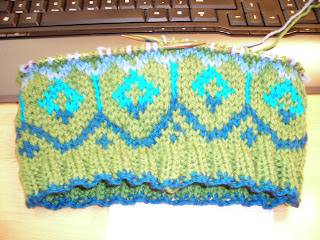 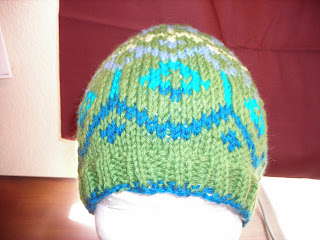 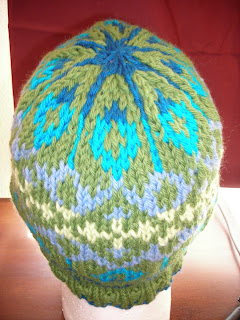 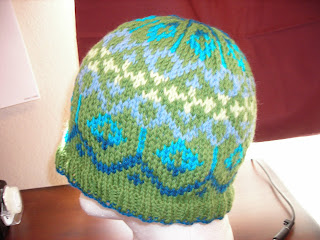 Lol. So there you have it, my first stranded knitting project albeit completely too big. Oh, and my color selection stank too.
Posted by ContraryWise at 8:16 AM 1 comment:

The Girl Who Knitted a Dragon Nest

I haven't been knitting much.  I've been reading like a fiend!!!  The Stieg Larsson books:  The Girl With the Dragon Tattoo, The Girl Who Played With Fire, and The Girl Who Kicked the Hornet's  Nest. Really great books. I see why they are sweeping the world.  I've even been watching the trilogy in movies in Swedish; the American version is not out yet. Apparently there is also a French version. These books are not for feint of heart though.  Serious crime and violence; the reality is very harsh.

However, I didn't say that I'd not been knitting at all.  I finally have decided to try a project from my Mastering Color Knitting book by Melissa Leapman.  I started the stranded hat.  So far so good but I haven't actually done anything yet to say that I'm actually doing stranded knitting. So far all I've done is added the background color. 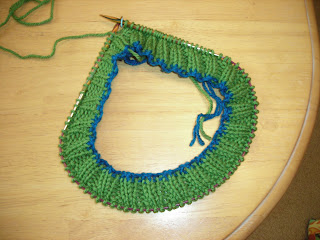 The Girl Who Knitted a Dragon Nest-Here's my story:

My knitting/crocheting/blah-blah is a big mess.  I have knitted a dragon nest in my sew room and I still want to start more projects. 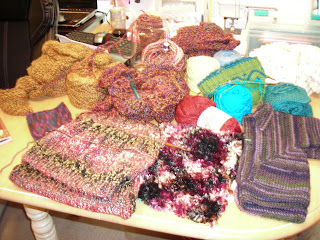 Plus my husband and I are renovating "the shop" into living quarters for my mother.  So far he's hung a new door on the back but hasn't gotten to the "finishing" work yet. Then whilst working out there, we discover that the A/C unit is not working so the A/C guys had to be called and you know they don't show up until they see $100 hit their accounts.

Additional plus, we just got a new dishwasher since the old one just slopped dirty water onto the dishes instead of washing them. we've had to wash by hand which I find to be very inconvenient.

Plus more, we bought a new mailbox because the old leaks and is rusty and we've all caught a fingernail on the rusted metal.

And, last but certainly not least, as an anniversary gift, we had shaded window screens added to the east and south windows of the house.  Wow, it is cooler in here.  Poor guy who installed them did it on our first 100 degree day (that's Fahrenheit). He didn't come until around 2:00 in the afternoon.  He looked wilted when he was done.  I can actually see my computer screen in the bright mornings now.


Posted by ContraryWise at 1:11 PM No comments:

I've finished the baby surprise jacket (BSJ) originally patterned by Elizabeth Zimmerman.  Just needs buttons.  I did the version with a collar:  I picked the stitches from the inside the first time so when I'd finished the seam showed.  I pulled it all out and added the collar again so the seam is on the outside.  Looks better this way. 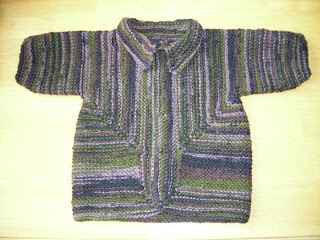 I also finished a pair of cotton socks that I was trying.  These took less than a week.  So easy.  I selected Antje Gillingham's chunky, cozy cotton socks from Knitting Circles Around Socks. 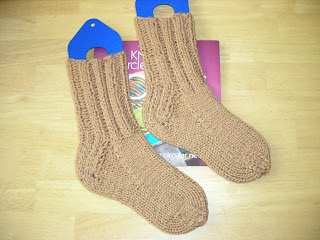 Wanted to try working with some specialty "yarn."  I bought a pom-pom, an eyelash and Patons Bohemian, which looks like velour or something.  We watched the Indy 500 and the Coca-Cola 600 on Sunday so I had lots of time to fiddle with these.  I didn't actually do anything with the Bohemian.  So far I'm just admiring it.

Pom-Pom:  Cast-on using e-style.  I tried regular and it was a little lumpy. 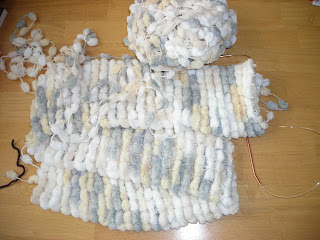 Eyelash is really easy to use.  No Problem. 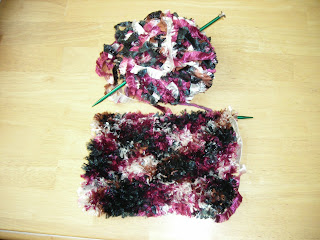 I also bought a book this past winter (I love books and have bought far too many of them) called Mastering Color Knitting by Melissa Leapman.  I have been trying a few samples.  So far its been hit and miss.  I actually only bought this to learn stranding, intarsia and double knitting.  The stranding did seem to get better with a bit of practice.  The first checker board was too tight and bunched up a bit.  The second is flat and smooth but the stitches look uneven with tighter and looser chains. I actually bought this book so that eventually I could do some work in another book that assumes you already know of this colorwork.  Since I didn't, I thought I'd better learn. 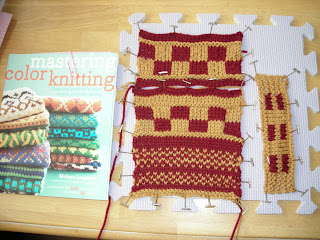 I haven't tried the intarsia yet but I did buy some yarn to give it go with from my local Wooly Ewe store. 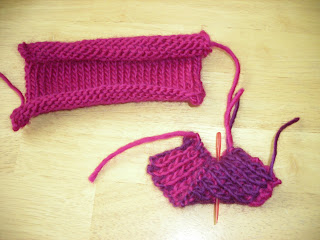 I did try the double knitting.  This was a challenge.  I knit with my working yarn in my left hand.  This is called Continental style.  I kept getting the yarn twisted.  Since double knitting requires two working yarns, I thought well maybe I should hold one working yarn in my right hand and one in my left.  I had to then practice knitting with the working yarn in my right hand, English style.  You can see from the sample that I twisted the knitting a few times because I was concentrating on the yarn instead of what I was doing. The double knitted piece, small as it is took me for-bleepin-ever to do.  Of course, I shouldn't have used a yarn that is so difficult to work with, lol. Oh, wonderful, the picture is so bad you can't tell how I goofed it up!!!
The best way to learn anything new, I've discovered is to just cast-on and try it out.  I have a whole basket of failures from the past year.  Some of these will, no doubt end up there.
Posted by ContraryWise at 7:29 AM No comments: